QuickMSG is a secure messaging format and an Android App of the same name. With it you can send messages either to other contacts directly or to groups. Its aim is to combine the ease of use that messaging apps give with the security of encrypted email.

What is special about QuickMSG?

Nothing really. QuickMSG uses a number of existing technologies and combines them such that the user can send messages to contacts and friends. There are a few differences with most messaging services:

There are also some differences with regular email: To sum up: email with the ease of use of a chat app.

Is SMTP and IMAP suitable for instant messaging?

The SMTP infrastructure of the internet has been handling huge amounts of traffic for years. Its decentralized nature ensures that no single entity can easily take down communications. And with IMAP messages can be delivered to the receipient almost instantanious. The user experience is not much different from using a central messaging service.

Who can read my messages?

You and the contacts you are sending it to (or receiving it from) and nobody else. The message is encrypted from end to end. Only on the end devices is is encrypted/decrypted.

The contents of your messages are stored on the device itself. Think carefully what you do with it. For example: backing up your phone is good, but think about were you are sending all your data and who has access to it. (tip: use encryption)

Can I send images or videos?

Yes, besides simple text messages almost any kind of media can be send. The QuickMSG app can only view images inline in the app itself, but any kind of data can be shared. 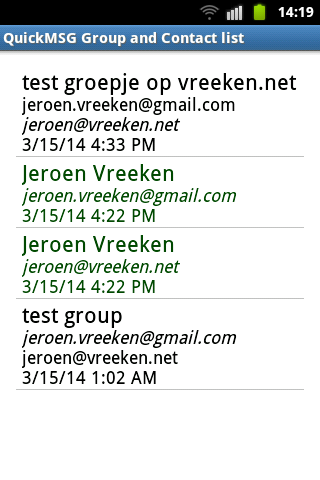 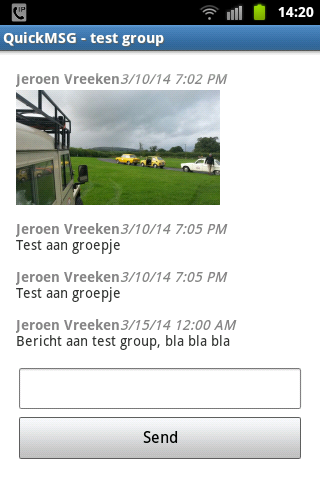 Is it limited to Android?

QuickMSG messages can be sent from any platform. However I only made an Android app. There is nothing that prevents creation of an app or plugin or whatever for your platform of choice... somebody just has to do it.

There is a command line tool for Linux, it is working, but mostly usefull for experiments and not very userfriendly.

The QuickMSG app is licensed under the GNU GPL v3.

Some of the libraries it uses are licensed under the MIT license or Apache license or CDDL/GPL v2 license with classpath exception.

The following sources are here for historical reasons. Current versions of the QuickMSG source have these integrated.